SmuttyCat would like to introduce you to his new love: Gotham. A beautifully scripted and acted drama on Fox TV by DC and Warner.

The story centers on the time immediately following Thomas and Martha Wayne’s murder. The development of heroes and villans is shown up close and in gritty color. Gotham does a wonderful job of showing how a simmering cesspool of greed and apathy explodes into super freaks. It becomes clear that if Batman had not come along to save this city, it may have been nuked off the planet by neighbors.

Ah, yes the DC TV comics machine rolls on. Marvel may be the massive behemoth of the big screen, but DC has become the undisputed champ of the weekly series in comics.

Following on the strong response to Arrow and Flash, Gotham shows that good stories and compelling characters will still bring in viewers. The only question SmuttyCat has is why DC would farm this show out to a different network. CW has been doing such a great job, did Fox out bid them? Something to ponder during nap time. Enjoy the clip, then be hooked.

Bugs Bunny to the Rescue!

Don’t you just love it? SmuttyCat guesses DC and Cartoon Network have taken note of the popularity of the great mash-ups at Disney. Phineas and Ferb have met the Avengers and Star Wars. Both with great results.

Bugs Bunny is one of the favorite heroes of classic cartoons. But he is in quite a pickle this time. Check out the trailer below and be sure to catch the episode today, August 31 at 6:30 EST. And give us a shout to let us know what you think of the trailer. 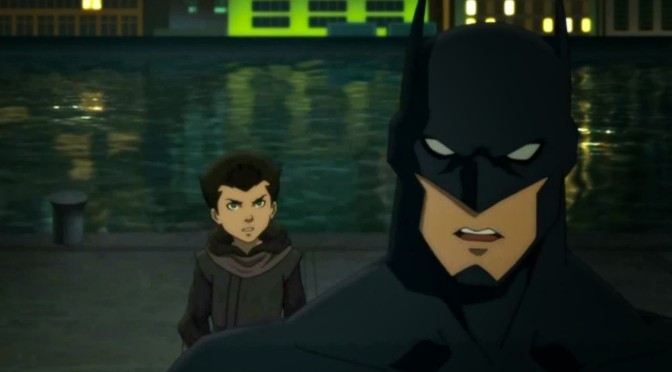 Well, we all knew that Batman/Bruce Wayne had an interesting personal life. Now the backstory of Batman and Talia, daughter of Ra’s al ghul comes back to the forefront in  a new DC animated film, Son of Batman.

This is the story of Batman learning of the son he never knew he had and having to deal with the League of Assains’ training Damian has grown up with.

If the full film is anything like the trailer, DC has another hit. And of course, SmuttyCat is delivering the trailer, courtesy of DC and YouTube.

Smutty has long been interested in animation, comics and superheroes.  However, the inspiration for creating a feature animation came from following the career of Dwayne McDuffie.  Smutty believes in giving credit where it’s due, so this post is dedicated to the great animation talent, Dwayne McDuffie.

Even if you are unfamiliar with Mr. McDuffie, you have probably seen his work.  Justice League Crisis on Two Earths and Justice League Doom were both written by McDuffie.

He created Static Shock!, wrote and produced Justice League Unlimited and wrote for many other titles including Ben 10: Alien Force and Teen Titans.

Sadly, McDuffie died on February 21, 2011 the day after his 49th birthday.  He leaves behind a legacy of pioneering work for other minority comic fans and creatives to follow and enjoy.  Smutty gives him the 4 paw up salute.

Thank you Dwayne, you are loved and missed still.

McDuffie on being Black in the Animation Field

Thank you to the following resources; Wikipedia, IMDb, Dwayne McDuffie.com